The idea was to start the season with some nice jumps. For sure we had some training goals which got replaced with just one theme: Having a blast!

Where have we been?

Oversimplified: Spain! 🙂
Empuriabrava is a two hours drive from Barcelona Airport in direction north west. Right at the ocean and very close to the french border. The dropzone Skydive Empuriabrava is right at the city around two kilometers far from the ocean.

The year before we made our first journey to a dropzone out of Germany. In October ’17 we checked out Skydive Algarve and we were stunned by the awesome view. So we used the winter to do some researches about nice dropzones in Europe. After seeing pictures from Empuria our destination was set.

Walking to the check-in counter and seeing the Beech 99 starting in the background made us smiling right away. The feeling about the right decision was there from the 1st moment. 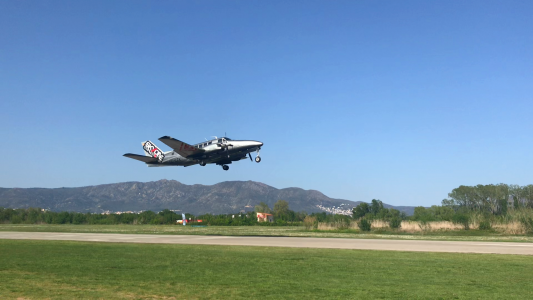 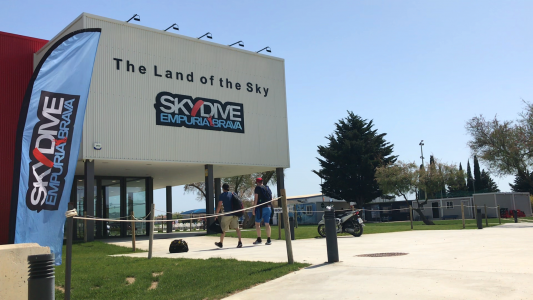 But let’s get back to the check-in counter. The building was looking like it’s brand new. Maybe it was, maybe not. The check-in process at the 1st visit takes everywhere some time but the team was able to support in english, spanish, german and probably in a few other languages, too. After the paperwork a stuff member made an extended gear check. This takes a lot time but somehow it gives you a good feeling about the gear quality of all people at the DZ. And for a stay of multiple days it’s only a fraction of the time.

After the registration at the check-in you can log in at a website to buy your tickets online. This is very comfortable and saves time. But to manifest they preferred to print the tickets at the check-in so the manifest (separated) can scan this. I don’t know if bad scanners at the manifest or bad phones of the clients were the reason for this extra step. A RFID card would reduce the walkways between check-in and manifest. It sounded like they work on it. So we will see how it works next time.

Skydive Empuriabrava is using a big hangar as packing area. There was plenty of space and with a the good separation inside this hangar it should work well even at boogie time. 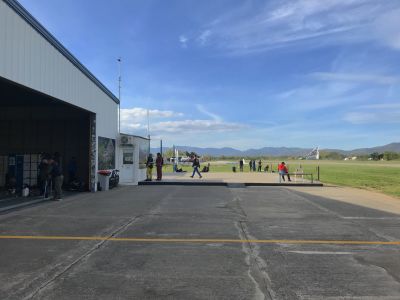 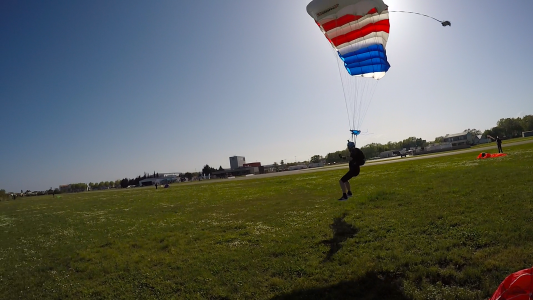 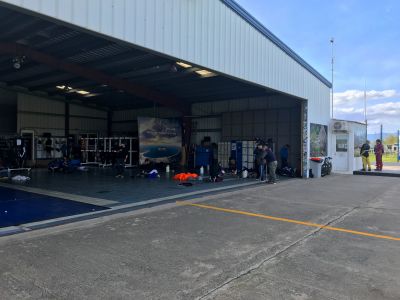 We heard rumors about a super hard and dry landing area but we found the exact opposite of what we heard. A well maintained green at the normal landing area and the swoop / staff landing area. For sure this is related to the season but at our visit in mid of April it couldn’t be better.
These two areas are separated by the runway. I really like this separation. This already splits the canopies in the air and you can be sure people around you are flying the same pattern. 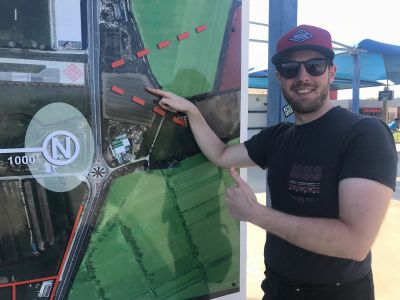 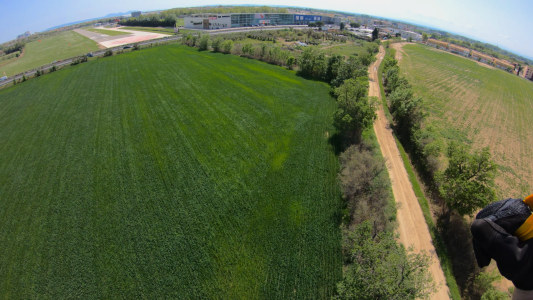 But wouldn’t be us if nothing went wrong. Sure one of us had an outside landing and the greenest field has been picked even it was in the no-go-area… uuuuuuups!
But beside to learn again where not to land it was interesting to watch how outside landings are handled. Telling the people at the manifest about a outside landing happened already some minutes after the pickup car was on the way. The pilot saw the outside landing and gave notice via radio. Seems like an often used routine. We already heard about changing wind conditions at Skydive Empuriabrava.

As mentioned before, we heard rumors about strong wind. And I think we got a lot luck with this. The whole week we spent at the dropzone had absolutely perfect wind conditions. As I remember there was no jump limit a single time back then.

At the week we were there they had two planes in action. A Beechcraft 99 and a Twin Otter. I felt like the Beech was the fastest plane I took at a dropzone. I hadn’t have a look at the clock but I can tell it was fast! A little bit less fast was the Twin Otter but the bigger plane scores with more space. With these awesome planes there was no space for complains 🙂 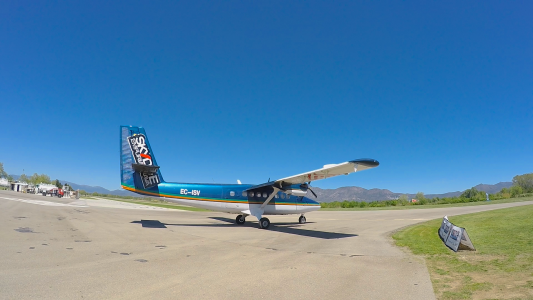 As I’ve heard they have also two other planes. A Porter PC-6, which wasn’t there during our stay, and a smaller one for the deluxe tandem package. But to be honest, I don’t have a clue which plane it was.

In walk distance you can find a shop for skydive equipment,  a wind tunnel and two tracks for karting. And after some meters more you have the whole city Empuriabrava and the ocean.

I am pretty sure the region is worth a trip even without skydiving but we have to check this out the next time. At the beginning of the season we couldn’t get enough from skydiving so we didn’t so much more. But with the nice and relaxed people down there at the dropzone, we had no reason to hang somewhere else! 🙂 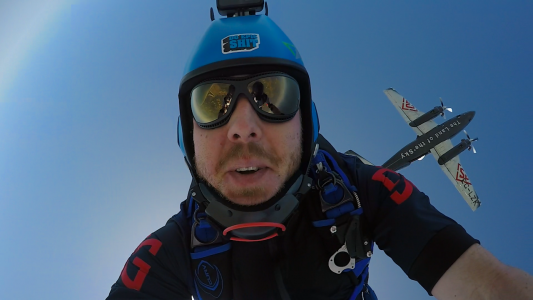 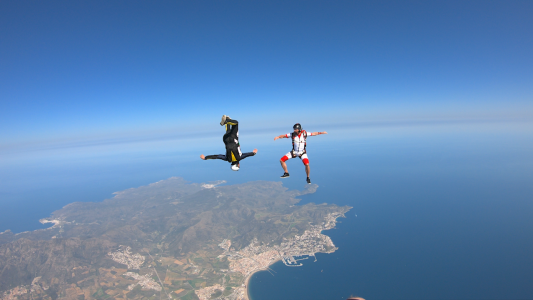 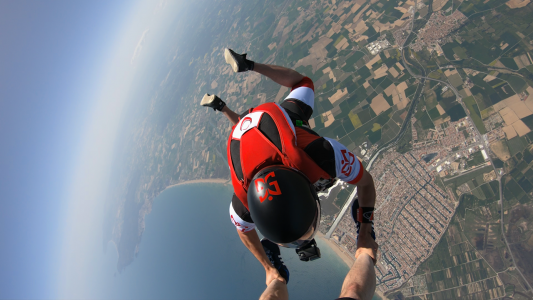 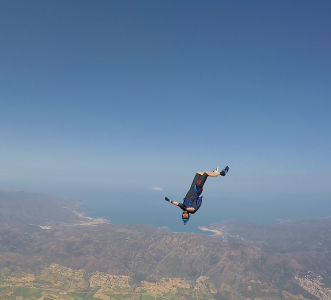 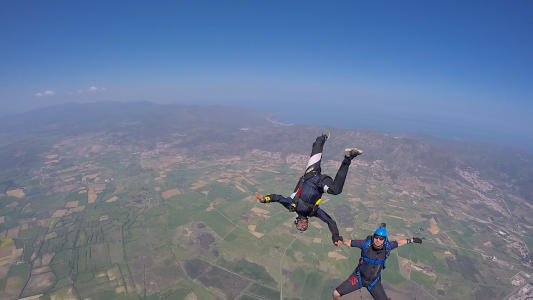 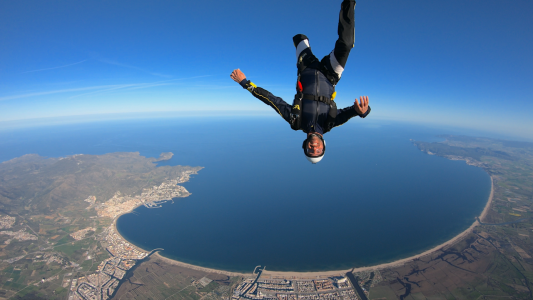 I you didn’t watched it already you might check out our Video (https://youtu.be/epvFtQwfs-c) to check our non-sense moves and the great view at Skydive Empuriabrava. Big greetings to Juanma who joined us for some fun jumps. For sure he pushed the average skill level to a whole different level. The week was a blast!